A post from Katrina Luetkebuenger, a West Bend Loss Prevention Representative: There are many risks to consider with winter driving. I didn’t think about this hazard until it almost flew right through my windshield. Last week while driving down the highway, a wintery explosion of snow and ice suddenly interrupted my thoughts. Several pieces of ice broke off the roof of the semi-truck traveling in front of me, causing cinder-block and brick-sized ice missiles to fly through the air at 70 miles per hour toward my minivan! With traffic on either side of me, there was no way to avoid them. Several huge ice chunks slammed into the roof of my car, each with a very loud bang. It sounded like somebody was hitting my car with a bat and instinct caused me to crouch in my seat with each thud. I thought the roof was caving in!

Parts of the minivan’s ceiling really did come down. The heavy ice caused the mounted roof control buttons for the doors, sunglasses holder, and overhead heat control panels for the backseats to break loose. These units were now swinging from the ceiling by their cords. Luckily, I was able to maintain control of my vehicle through all of the impacts. 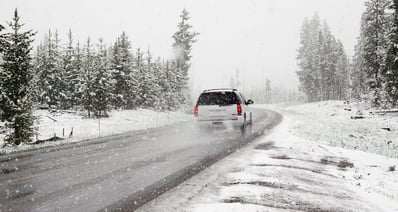 Once it was safe to pull over for an inspection, I saw my van had several large dents in the roof, one of them more than a foot wide. There was another dent just inches from my windshield. Unfortunately, I wasn’t able to get the license plate of the truck driver who damaged my vehicle. I wondered, even if I had, could he or she be held accountable? It seems obvious that if you’re driving a vehicle covered in snow and ice, it will go somewhere as you travel. Drivers should be responsible for removing dangerous debris from their vehicles. But are they?

The answer is that it depends on where you are. Twelve states have laws that require vehicles to remove all snow and ice. These laws were often the result of tragic accidents. During my research, I read many heartbreaking stories in which ice chunks flew through windshields resulting in death. Grieving and motivated family members pushed for legislation in their states to protect others, like Jessica’s Law in New Hampshire. In addition to these laws pertaining to snow and ice, I learned some states have littering laws or requirements to maintain a safe vehicle. I also found a Today Show segment warning the public of these dangers. This piece includes video footage very similar to my experience.

Now that I’m unfortunately aware of this threat, I urge you to take these precautions while driving this winter:

Fact or Fiction: Can you Spot the Truth?

Reduce your club’s probability of a computer attack